Age Rating*: Rated 17+ for the following:

Brief Description*: On Yik Yak, anonymously connect with everyone within 5 miles.

It’s the same Yik Yak experience millions knew and loved, and now you can live it again.

All you need to do to get started on Yik Yak is verify your humanity with a valid US phone number.

Inside the app, your identity is a secret. This makes it fun and easy to jump into conversations without societal labels! Everyone is equal on Yik Yak.

*Information from the App Store

Yik Yak is back. It was originally released in 2013. It quickly became popular on college campuses with its anonymous based feature. But with anything that allows for anonymous posting, it became filled with bullying, harassment and racist posts. Yik Yak attempted to address the issues, but eventually shut down in 2017.

Yik Yak allows you to post anonymously to a feed where others can comment on the post. The app uses your location and sets a 5-mile radius from where you are located. You will only be able to read posts at a local level.

I set up an account and as you can see by the screen shots, Yik Yak encourages positive behaviors on the platform and states that they will immediately and permanently ban anyone who breaks their Community Guardrails or Terms of Service. You can also see from the last screenshot only one of the four posts in my local area didn’t have something questionable in it.

I’m not sure if Yik Yak will become popular with youth, but if it does, I believe bullying could easily make its way to Yik Yak.

Check out this article about its re-release.

With any piece of technology, you should have a Technology Contract in place before they use it.

I would not recommend Yik Yak for anyone under 17 years old. 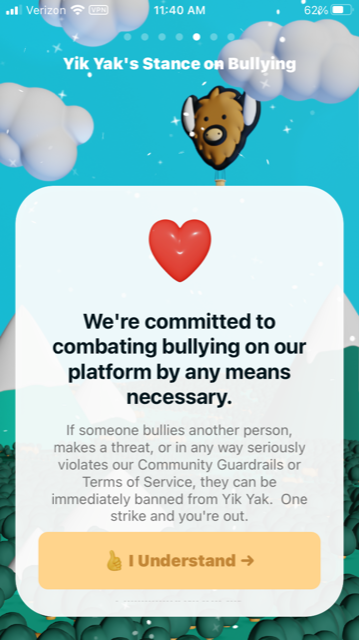